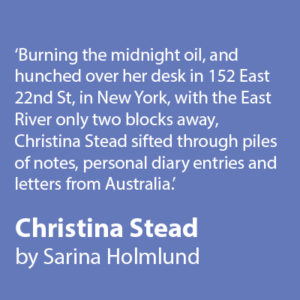 The Man Who Didn’t Love Women

Burning the midnight oil, and hunched over her desk in 152 East 22nd St, in New York, with the East River only two blocks away, Christina Stead sifted through piles of notes, personal diary entries, and letters from Australia.

She had an affinity with harbours (and water), because her Australian family home at Watson Bay had overlooked the ocean, and she used to sit up for hours past midnight and watch the ships from her window. New York was no different.

In this room, with a balcony that could see the ships passing, Stead came to grips with her own childhood, and put her younger self into the pages as a character, up for evaluation. Here, during the first years of World War II, she finished The Man Who Loved Children (1940).

The first time I was acquainted with Christina Stead, it was through reading The Man Who Loved Children. I was enchanted by her cynical, satirical humour and the psychological evaluations of the characters of the Pollit Family. I was in Year 10 at the time, and people laughed at such a strange title and speculated what its contents were really about. Despite it innocuous title, the book conveyed a deeply serious critique of family values, and of the cultural and societal norms of patriarchy during the twentieth century.

So what lay within these pages that reflected and criticised her childhood?

The Man Who Loved Children is a novel about the Pollit family, and focuses on Louisa Pollit, the eldest daughter, having to take care of her six other siblings, while navigating two ‘dysfunctional’ and warring parents Henny and Samuel. Samuel is a raving scientist, and Henny is an heiress with absolutely no understanding of how to handle money, and who eventually takes her own life. The novel charts Louisa’s feelings of rejection by her mother, her hatred for her father, her morbid fascination with her maladaptive family situation, and her fears for her siblings future, while dreaming of a romantic celebrity life in the theatre. The resolution of the novel is Louisa running away pursue those dreams.

Christina Ellen Stead was born in Rockdale, NSW in July 17th, 1902 to parents George and Ellen Stead. Ellen died when Christina was only two, and her father remarried Ada Gibbons, a woman of higher wealth and social status, in 1907. With Ada, George had six more children, two girls and four boys, whom Christina grew up with.

Christina was educated at top institutions and went on to become a teacher. However, she grew bored of the Australian landscape (both physical and political), and moved to London in 1928. Later, she travelled Europe and America, and with the encouragement of William Blake (formerly William Blech whom she married in 1952) she wrote her most notable works.

Stead won many literary prizes, including the annual Britannica Australia Award in 1967, and the Patrick White Literary Award in 1974. However, because of her support of Communism and Stalinism, and because her depiction of the Australian culture was particularly unfavourable with mainland Australians (yet the international audience loved them), she was labelled an ‘expatriate’ and the $10,000 from the Britannica Award was never presented to her.

Now, the politics and culture has changed, and her psychological satire and realist language has earned her a place on a pedestal with the most revered Australian writers such as Helen Garner, Tim Winton, Patrick White, Christos Tsiolkas, and many more.

Whilst the writing of The Man Who Loves Children, “gives way to comedy and satire . . . [and] irony and self-mockering,” it nonetheless presents some of her “deepest experiences” from her childhood.

I have to wonder why Christina Stead aligned herself with Stalinism, considering her mainstream audience was located in America, England and France, and would have been critical of this political standpoint? Was it only for the fact that it advocated equality between the sexes?

Yet women under Stalinism did not achieve equality. It is true they were no longer limited to domestic duties, but were expected to work in industry in addition to their role at home. This did not necessarily make them equal to men in society however, because Stalinism did not advocate for a similar domestic role for men, which would have provided balance. Instead, what Stalinism produced was a new type of super womanhood, where women were expected to take on industrial work in addition to domestic duties.

Wouldn’t this apparent failure at equality have shifted her political viewpoint?

Stead has openly admitted that The Man Who Loved Children was an autobiographical novel about her childhood.

However, it is still hard to imagine why she put herself and her childhood on the literary ‘chopping block’ to be scrutinised by international critics? And why during the strife and political turmoil of World War II, where a blurring of traditional male and female binary roles were heavily relied upon for the war effort?

I can only speculate that perhaps, by her late thirties when she was writing the novel, she felt the traditional social pressures of when she would be married, when she would settle down, when she would have children , and therefore, because of her childhood experiences, felt the need to clarify her reluctant position.

In an interview in 1973, Stead was told that The Man Who Loved Children

“is perhaps the greatest book about family life that’s ever been written. It is certainly the most powerful evocation of what it’s like to live in a family that I’ve ever read.”

In my opinion, this interview shows exactly how Stead disliked stereotypical family value systems. As an individual, she actively resisted the gender binaries, and although she married, she didn’t have children. Being a realist writer, Stead’s approach in representing the characters of the Pollit family demonstrates how the family, as an institution, is firmly rooted in oppressive male/female binaries, and serves to reinforce some of the most basic and fundamental patriarchal ideologies. In my opinion this idea overshadows her political stance.

So why did Stead not consider herself a feminist?

According to Hazel Rowley, (a leading Biographer on Stead’s life), she was

“impatient with the Women’s Movement in the 1970’s which—as she saw it—polarised the sexes, emphasising their differences. Stead wanted a world in which cultural and biological differences were neither apologetically concealed nor aggressively proclaimed.”

Looking at the writing of The Man Who Loved Children, it is clear to see Stead has some understanding of the conditions of women, emphasised by the “novel’s terrible evocation of domestic misery.”

Stead must have seen how patriarchy was instilled in family values, how crippled women were by domesticity and by children. The Man Who Loved Children cannot stand objective to its context and therefore does bring insight into her political views.

Two years after Stead wrote The Man Who Loved Children, she noted;

“It was a great weight off my mind, I ought really to say my soul . . . it was as if I escaped from jail, although it may seem savage and mean to others.”

It may seem ‘savage’ because of the ruthless way her father and stepmother are portrayed, with Stead’s harsh criticisms of parenting, of her childhood misery, not to mention larger universal themes.

Sam Pollit could be seen, and has been seen, as an exact replication of Stead’s father George. Samuel is represented as a domineering patriarch, a self-assured and arrogant scientist, who in his entitlement as ‘head of the family’ oppresses his wife.

Jonathan Franzen notes that Samuel has become the embodiment of the

“Great White Father, he is literally Uncle Sam. He’s the kind of misogynist who adores femininity in the abstract but feels himself ‘dragged down to earth—no, into the slime' by any actual flesh-and blood woman, and who believes that women are too crazy to be allowed to vote.”

The one thing that remains certain in The Man Who Loved Children is that the representation of the character of Samuel Pollit is not positive. Franzen also notes how, the novel reads “like a daughter’s offering . . . of white-hot competitive hatred.”

Christina’s criticism of her step-mother Ada is less direct. I wonder if, perhaps Christina felt some sympathy for Ada because she was married to George?

One of the most cited quotes from Christina Stead is how she knew her step-mother did not love her.

“I was the kind of child only a mother could love and then probably with doubts. Sometimes servants thought I was my father’s illegitimate child . . . I was something the gipsies had left behind.”

Like Ada, the character Henny was prone to fainting under stress. Henny is constantly oppressed by Samuel through children and child-bearing, and also because of the way Samuel regularly mocks and insults her until she eventually takes her own life.

If we are to see The Man Who Loved Children as an account of Stead’s thoughts through her childhood, then there is a basis for believing she was entirely committed to improving (and actively criticising) the conditions of women in the 1900’s, through the power of writing. Stead’s story has been unflinchingly told through this novel, and in aligning it with reality, true voices are able to speak.