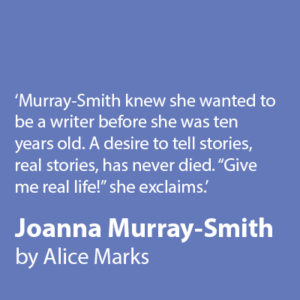 I’ve got something to say –

I’m not going away –

I’m not shedding a tear …

I’m not wearing a frown …

I’m not going under!

I’m not going down!

The crowd erupts into wild applause.

Joanna Murray-Smith was raised by entertainers.

“Our house was always full of writers and artists and musicians. They [my parents] were always throwing big parties and there was never a weekend when we didn’t have people staying, or things going on.”

She tells me this in her beautifully refurbished sitting room, which resembles a page ripped straight out of Vogue Living; tastefully elegant yet comfortably modern.

The Murray-Smith family home was the perfect environment for a writer to flourish.

“When I was very young, my mother and father instilled in me the wonders of the imagination; the joys of stories, and storytelling, and the importance of books.”

Her voice is soothing; the kind that belongs on the audiobooks I listen to on long car trips.

I wanted to be a writer. I wanted to be a serious writer writing about serious things in a serious world! I wanted to put the ‘high’ in ‘falutin’. I want to write elegant commentaries about life and art and specialise in surprising syntaxes, in elevated thoughts, peppering my pieces with the kind of insights that make a reader put down their coffee mug on the table and say: ‘Holy cow, that dame can write!’

(Too Junior Jones, Songs for Nobodies)

Murray-Smith knew she wanted to be a writer before she was ten years old. A desire to tell stories, real stories, has never died. “Give me real life!” she exclaims.

Forty years later, she holds a reputation as one of Australia’s most iconic, popular playwrights. This journey was fostered by Nita and Stephen Murray-Smith, whose Mount Eliza home hosted a collection of thirty thousand books. “Every wall other than in the bathroom and the kitchen was completely covered”, their daughter reminisces. “They knew every great Australian writer. They were referenced all the time, and they were frequently in our house.”

How I would love to be a child in that house. To wander into the dining room and find my parents sharing a meal with Amirah Inglis. To open the front door and be greeted by Christina Stead. To spend a weekend with Dorothy Hewett. These women were the guests of Murray-Smith’s childhood.

Murray-Smith reflects on her writing career with a little guilt. “It is so much more of a challenge to become a writer if your parents don’t believe in it,” she admits. “For me, writing was at the centre of my parents’ lives. I was very lucky – they never questioned the practicality of becoming a writer, they just assumed I’d do it.”

I feel like grabbing young women and shaking them. Get out there and find a revolution! Cry! Scream! Agitate!

(Margot Mason, The Female of the Species)

I must admit that, while reaching for the doorbell of her northern Fitzroy home, I am preparing myself to be intimidated by the woman behind these political, powerful play scripts; a formidable and harshly satirical artist.

Retrospectively, I realise that I was anticipating one of her characters to open the door. Instead, I am welcomed inside by Joanna.

She wears comfortable-looking track pants, and her lips are painted bright red. Her two dogs jump all over me, and as she ushers me through the hallway, apologising for mess that does not exist, I know that I love her immediately.

I begin the interview, excitedly anticipating hard-core quips about fighting the patriarchy, and empowering big-time-female-writer statements. But to my great astonishment, Murray-Smith says, “I was really put off by feminism for a long time.”

If you’re in a travelling mood,

Baby, I don’t want to be rude,

But I’ll say it once and again –

Don’t get yourself a passport

To the terrible country of men.

The feminist scene at the University of Melbourne during the 1980s epitomised the concerns of the second-wave movement; furious cries for the prevention of sexual assault and domestic violence, and a significant push for the voices of working-class women, queer women, and women of colour to be equally heard and publicised in the community.

But Murray-Smith reflects on it squeamishly; “it was pretty nightmarish, actually. It was hijacked by blinkered and uncreative minds.”

I am confused. How could feminism be ‘uncreative’? Creativity seemed like an inherent trait of the movement, something with which I had always associated my own feminist identity. Moreover, I am concerned. There is something that rings true in Murray-Smith’s words, but I can’t name it.

She tells me that the plays she wrote as a student were severely criticised – “I’d get into terrible trouble for writing plays about middle class women, because they’d ask, “why aren’t you writing plays about working class women?” Then when I wrote women who were flawed, it was like, “why aren’t you writing women who are great exemplars of what it is to be female?” I hated those women, there were horrible to me.”

Her vulnerability to vitriolic women is familiar. I realise that I have, to some degree, been in her shoes. It can be terrifying to call oneself a feminist. It’s that feeling of uncertainty, of unworthiness, of getting it wrong. How can I call myself a feminist when I haven’t had to fight against sex slavery? When I haven’t protested in the streets for it? When I am in a relationship with a man?

When one considers Murray-Smith’s upbringing, her reluctance towards feminism is less startling.

Her parents were both devoted communists during their early adulthoods, but eventually discovered the underbelly of their beliefs. “My mother had gone from crying when Stalin, the ‘great hero’, died, to discovering what he had done, and being really scarred by that. I think my parents were scarred their whole lives by how politically misguided they had been in their youth.”

As a result, their daughter grew up in a household where any form of ideology was treated with extreme scepticism. Ideologies were “on some level, not human, not real.”

Through their eyes, feminists resemble robots. I wonder if this is true.

…it seems to me you love having a reason to complain, like so many women. Instead of getting on with things, you have to find the fucking angst. What is it with women and their infatuation with injustice?

Murray-Smith’s writing career is not defined, or limited to, feminist politics. She makes this very clear: “it wasn’t about flying the flag for feminism”, she says, referencing her emergence as a playwright with companies like Playbox Theatre (later Malthouse Productions) and the Melbourne Theatre Company.

I feel a little unsettled. Her aversive tone makes me wonder if, maybe, the feminist cause really is as hard lined and inflexible as she purports it to be.

Remnants of her ideological scepticism are recognisable in satirical plays such as Female of the Species. This play is about a celebrated feminist academic, who is confronted by a maniacal ex-student holding a gun. The play received a great deal of criticism for its controversial parodic tone, as Murray-Smith is well aware. “It caused a big fuss, some people thought that because I was ‘taking the piss’, so to speak, out of feminism, I was denigrating it. But I thought it was a statement about how strong feminism had become, that it could embrace comedy and withstand criticism.”

Perhaps the intrigue surrounding Murray-Smith’s plays lies in their ability to create a public space for women’s stories, without being “hectoring or lecturing”. “I was certainly mindful of writing lots of parts for women,” she says of her past plays.

So, who does Joanna Murray-Smith write?

Women, from all walks of life.

They range from matriarchal mothers, to wise old women, to flamboyant brides-to-be, to stressed singletons. Joanna smiles as I rattle off a few of my favourites. Beatrice Ethel Appleton, Theresa McTerry, Harper Clements to name a few. I hope I don’t sound like a sycophant. All of her women are richly written, driven by quirky histories, eccentric aspirations and deep-set anxieties. They are all flawed.

MENTAL NOTE: MUSTN’T ACCIDENTALLY KILL THE CHILDREN! I’m a mess, they’ve got my genes, I’VE FUCKED THEM UP!!

During a speech at the National Play Festival in 2015, Murray-Smith addressed the intrinsic relationship she had with her mother, and the impact of her death on her creative work.

She describes her as a “ferocious champion of her children, the number one publicist.” Her mother’s ambition was a driving force behind her plays, and when she died, Murray-Smith was overcome by a feeling that “the creative flame in me was, not dead, but on a very low flicker.”

I automatically recall my own mother’s instrumental presence throughout my development as a young woman.

Motherhood is a central focus in many of Murray-Smith’s plays, and although she claims her mother does not intentionally feature in her play scripts, she admits that “there is something about the strength and determination of the women I write, both young and old, which is inevitably derived from her as the primary woman in my life.”

A feminist must fight against her own reputation.

In Murray-Smith’s case, to defy critics who call her work “conservative” and condemn her characters for “not having suffered enough” is to stand up for her own voice in an industry that is constantly at odds with its own political standards. It is a battle of creative integrity, and it is a valid cause.

From the glorious hour I spent in Joanna’s sitting room, I came to know a highly intellectual, spirited, generous mind. I hope I might create work like hers one day; for women, about women. Moreover, she wasn’t the woman I was expecting, and when I look back on our conversation, and I realise how happy I am about this.

Joanna Murray-Smith has something to say; about women, about conflict, about life. It is a joy to write about her.

But now, I’ll let her plays do the talking.

Groves, Nancy. “Joanna Murray-Smith – ‘There is no question, writing has saved my life.’” The Guardian 2014. Web. 20 September 2016. https://www.theguardian.com/stage/2014/nov/24/joanna-murray-smith-writing-has-saved-my-life