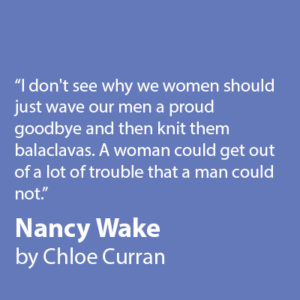 From times of conflict, unexpected heroes emerge. Nancy Wake was one of those heroes.

Born in New Zealand in 1912, Wake was raised in Sydney by her mother after her father sold the family home and returned to New Zealand without them. Her independence and resourcefulness, along with an inheritance she received at twenty, allowed her to move to England via New York to become a journalist.

In 1933 on one of her first assignments Wake was to interview Adolf Hitler in Vienna. It was at this point that Nancy Wake first came face-to-face with impending rise of the Nazi regime. From this point, she was committed to bringing down Hitler and his regime and she was true to her word.

While travelling through France writing articles to support herself, Nancy met the man whom she later married. Henri Fiocca was a wealthy French industrialist living in Marseilles where the two settled prior to the war. It was here Wake was introduced to a life of espionage and intrigue.

As the wife of a powerful Frenchman, Wake was able to travel with a freedom that not many were granted following France’s surrender to Germany in 1940. She began trekking through the Pyrenees as a human courier for the resistance movement in France often transporting food and messages to underground fighters. Soon, however, she began to aid the escape of evaders and allied soldiers into Spain.

Nancy would sneak ‘the bodies’ between safe houses in the South of France before leading them through the treacherous peaks of the Pyrenees Mountains. The groups would hike through freezing temperatures for two hours at a time. Nancy recalls how they would swap their wet socks for dry ones during their ten-minute break to avoid frostbite. As their dogs were unable to climb the rock formations, German sentries were restricted to heavily patrolling only the foothills of the Pyrenees. Despite often being a stones-throw from her enemies, Wake assisted roughly 2,000 escapes over two and a half years.

Though she was never caught, word spread throughout the German Gestapo of a mysterious dark-haired woman operating the southern escape. She became one of the Gestapo’s most wanted and with a five million franc bounty on her head she became known as ‘The White Mouse’ for her continued ability to evade capture.

The Germans began hunting ‘The White Mouse’ and soon it became obvious to Wake the pest they were searching for was her. By the time the Gestapo had connected the dots between ‘The White Mouse’ and Madame Henri Fiocca, “Madame Henri Fiocca had skedaddled and had gone across the Pyrenees”. In order to conceal her intentions to escape from untrustworthy neighbours, Wake was forced to lie to her husband to the end. She left their apartment and before closing the door for the last time yelled back to Henri, “back soon”. Of this moment Nancy reflects…

“I cried all the way to the Gare Saint Charles and all the way up to Toulouse. It was a dreadful thing for me… But it had to be done.”

Through Spain, Nancy continued on to England where she discovered the Gestapo had arrested Henri and was interrogating him of her whereabouts. When she hadn’t heard news of Henri in 6 weeks she was determined to return to France.

Wake began training in 1943 with the Special Operations Executive in England and Scotland as a saboteur. She was trained in weaponry, the art of the silent kill and identifying German planes, soldier ranks and language. Wake was also schooled in coding and decoding messages. Where most soldiers chose a passage from the bible as their decryption code Nancy opted for the slightly more mischievous…

She stood right there in the midnight air as the moon shone through her nightie. It bit right on the nipple, oh the tit. Oh, Jesus Christ Almighty.

Following extensive training in England and Scotland, Nancy finally flew back into war-torn France in 1943 in the belly of a liberator bomber. Wake recalled of her return to France…

“…I was Hardly Hollywood’s idea of a glamorous spy.

Over civilian clothes, silk-stockinged and high-heeled, I wore overalls, carried revolvers in the pockets, and topped the lot with a bulky camel-haired coat, webbing harness, parachute and tin hat. Even more incongruous was the matronly handbag, full of cash and secret instructions for D-day. My ankles were bandaged for support when I hit the ground.

But I'd spent years in France working as an escape courier. I'd walked out across the Pyrenees and joined the Special Operations Executive in England, and I was desperate to return to France and continue working against Hitler. Neither airsickness nor looking like a clumsily wrapped parcel was going to deter me…”

Upon a less than graceful landing in a paddock two across from where she was meant to land, Nancy released herself from her parachute that was tangled in a tree. Quickly, stripping her overalls she hid in a near-by bush until she heard Hubert’s voice from the distance. She arrived as he, along with a good-looking young Frenchman named Henri Tardivat were removing her parachute from the branches of the tree. Gallantly and in a manner typical of the French, Nancy recalls Tardivat commenting, "I hope all trees in France bear such beautiful fruit this year."

Contrary to what many believe, Wake remained faithful to her husband throughout the war despite being surrounded by thousands of affection-starved Frenchmen. She defends herself explaining,

“Lots of people have a false idea about a woman living amongst so many men. But, this country was known as the fortress of France. Very mountainous and a lot of pine trees… And even if I had had the idea, pine trees aren’t very comfortable. They aren’t very conducive to love affairs.”

In 1944, in a final effort to break up the French Marquis, 20,000 Germans descended on Nancy’s 7,000 fighters. In the confusion, her radio operator buried his wireless set and codes to ensure they remained out of the wrong hands. Out of desperation to communicate with England, Wake began what she described as “that bike ride of mine”.

Setting off North, Wake rode through enemy occupied territory passing numerous German checkpoints. Women according to Wake, have a unique power in times of combat. She once explained her reasoning…

“I don't see why we women should just wave our men a proud goodbye and then knit them balaclavas. A woman could get out of a lot of trouble that a man could not.”

Wake at one point in the ride confronted a substantial German barricade where she embodied this power. She simply waved to an officer on the other side of the road as she approached and in perfect French asked, “do you want to search me?” The German soldier looked her up and down and satisfied with her apparent innocence waved her through saying, “no mademoiselle, carry on.”

She reached her destination and organized with England where the next airdrop of ammunition, food and supplies would be and ensured a replacement radio and codes were included. Riding day-and-night, Wake rode 500 kilometres in just 71 and half hours.

Soon after the completion of her marathon bike ride, Nancy re-connected with the Frenchman she met when she parachuted back into France. Henri Tardivat suggested that if Nancy desired ‘a bit of fun’ she should join his attack on the Gestapo headquarters in Montucon.

“The most exciting sortie I ever made. I entered the building by the back door, raced up the stairs, opened the first door along the passageway, threw in my grenades and ran like hell.”

Henri Tardivat and Nancy Wake were destined to be lifelong friends. Rather than naming his daughter after a saint, as was tradition, Tardivat even fought with a priest for the right to christen his daughter Nancy in Wake’s honour. Of his friend he explains…

“She is the most feminine woman I know, until the fighting starts. Then, she is like five men.”

Following the liberation of France in August of 1944, Nancy was in Vichy celebrating alongside her troops. However, her celebrations were soon clouded, as it was here she bumped into an acquaintance from Marseilles. The woman had worked in the hotel where Wake had married her husband prior to the war. When Nancy explained her plans were to return to Marseilles to reunite with her husband, the woman sadly revealed that Henri had been killed. The Germans had tortured and executed him for having not disclosed her whereabouts. Of this Nancy was distraught.

Following the war, the United States, Britain and France all awarded numerous awards to Wake for her wartime efforts including the Legion d'Honneur - France’s highest military honour.

After some 60 years, Nancy Wake finally received Australian recognition for her heroism. In 2004 she was made a Companion of the Order of Australia.

She once said of being snubbed of Australian recognition…

'They can stick their award and be thankful it's not a pineapple'.

Wake, N 1985, The Autobiography of the Woman the Gestapo Called the White Mouse, Sun Books, Sydney.