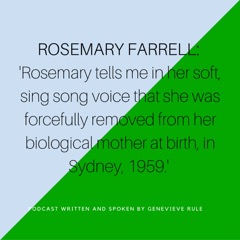 Standing inside a papier mâchéd womb on the border of Victoria and NSW, is not what I expected to be doing with my Wednesday afternoon. Like the inside of a light bulb, warm and slightly glowing, this artwork pulses with energy and a sense of sadness. Words are inscribed on the membrane, without consent, baby for adoption and assorted birth certificates with lies graffitied all over them.

Like a moth to this artworks subdued flame, I am drawn into Rosemary Farrell’s world.

The suspended uterus pays homage to the some 250,000 babies forcefully removed from their mothers, under Australia’s former adoption policies.

Rosemary is one of these children.

The front door of her house is ancient. The handle has to be pulled sideways and it splutters open like a stiff gear change on an old diesel. Rosemary and her husband Pat found the door in an antique shop here in Albury when they started building their home.

Promotional videos boast Albury’s well-stocked Chinese restaurants and ubiquitous pokey machines, but Rosemary and Pat’s hobby farm feels a world apart from Albury’s bad architecture, it’s a slice of heaven. The land surrounding the Murray River is flat, so the area transforms into a swampy wetland whenever it rains. Birds flock here. Egrets, Spoonbills and something that sounds like a horn you can here from Rosemary’s sitting room. Menacing portraits of her three adult daughters and son line the walls, menacing only because they are life sized and all of them gorgeous.

Her husband Pat is absent from the walls, but his presence in the house swells from the piano. Renditions of Cat Stevens and ABBA classics reverberate along the wooden floorboards from the music room where he plays. He’s got these big, cushy lips so he plays the French horn in a brass band on Wednesday evenings. Just the two of them live here now, in the house Rosemary designed.

Rosemary’s mouth is wide and she has a long nose that tilts down a little when she smiles, inviting you to smile back. Her skin is flawless and has that soft Mediterranean look about it, as if it could soak up all the seawater and sun in the world and still look like caramel. The parents Rosemary knew were unerring Catholics, with conservative features and pale skin. As were both her siblings.

Sitting in her living room, there is the faint sound of Pat tiptoeing in the kitchen for the sake of my recorder and the horn bird intermittently blaring from the river.

Rosemary tells me in her soft, sing song voice that she was forcefully removed from her biological mother at birth, in Sydney, 1959.

“My adoption was state run. It was deemed immoral and inappropriate to have a child out of wedlock, so my mother was drugged with barbiturates, and her signature on the consent forms was forced.”

Forced adoption practices in Australia stemmed out of the eugenics discourse from the 1920’s and were practiced into the late 80’s. The ‘science’ of eugenics is based around the idea of improving the race and was espoused by an elite group of powerful, white men. So the laws and regulations surrounding adoption reinforced the warped and misogynistic agenda of eugenics.

Within this ‘science’, the unwed mother was pathologised as feeble-minded and neurotic, considered promiscuous and unworthy of her child. It was only by giving up her child to a worthy, married couple that she was considered fit to re-enter society. The essence of this deranged idea stems from the theory that a healthy society will rise from a healthy family unit. That being two heterosexual parents joined in matrimony.

The unwed mothers were funnelled through a tightly controlled faucet of government departments, where the women were manipulated and de-humanised. Within hospitals the single mothers were often drugged, abused and refused access to their babies until they would consent to adoption.

They were then sworn to secrecy.

“I was told I was adopted when I was 5 and my adoptive mother made me swear to never speak of it again. It wasn’t until the 90’s, that children and parents could make their files public to people who might want to find you. Before that you could be arrested and sent to prison for trying to make contact.”

In Rosemary’s airy and luscious living room, I trawl through the documents that swore the mothers to their suffocating secrecy. Pieces of paper that legitimise Rosemary’s existence and erased her biological parents.

In the 90’s, under the Freedom of Information Act, Rosemary made her adoption file public, against her adoptive mothers’ wishes, and began to search for her parents. She spent years unravelling the red tape surrounding the forced adoption documentation, only to discover secrets and clumsy lies.

Her mothers name was incorrect and her signature uncoordinated and forced. Her fathers name was scrawled on a document as “unknown”. The legislation was skewed to protect the fathers, his name would be excluded from the birth certificate to salvage his manhood, making him exempt from persecution and embarrassment.

“She sort of just, went into shock. She agreed to meet me, but it was too much for her. She wouldn’t talk to me about anything and it just sat there, unspoken between us. The memory is so deeply supressed for her.”

Rosemary describes her mother as having had this little piece of her removed, then having to keep it a secret. A huge burden she has had to carry with her all the time, and never speak about.

Rosemary is hard to hear when she talks about her mother. The spoonbills suddenly seem very loud.

“The mothers, some can embrace the child, but some can’t even go there because it is just too painful. There is a need to keep it inside a box. They tried to break the bond, they considered the bond as nothing, these women were nothing. They were just expected to forget it ever happened.”

Rosemary’s beautiful family, home and hospitality are testament to her ability to love, and to love freely. But she tells me there is a bit of love she has kept aside for her biological parents, waiting to offer it to them. A burden that she, like her mother, carried for her entire life. Her biological mother received this child love but could not return it.

What she could give to Rosemary was the name of her father, Lou. He also lived in Sydney and Rosemary wrote to him. It was a formal letter, gently explaining she was his daughter and asking for a little medical history of the family. She wasn’t sure what to expect from him, just that she knew she had to make contact.

“He was just gorgeous, absolutely delicious. The similarities between us were huge and profound.”

They fell in love almost immediately. Lou thought she walked just like her mother. They would cook together. They had the same way of arranging food on lots of little unnecessary plates and platters. They both loved to sing, and dance and he moved to Albury to be closer to Rosemary and her family.

Rosemary describes it as a spark, a current of electricity shocking through the both of them when they were around each other. Something she had never felt with her adoptive family.

After four years together, Lou died from cancer, in 2014. The blow was devastating for Rosemary and her family. Unfairly robbed of time at the beginning of her life and the end of his.

A national apology was offered in 2013, suitably given by Australia’s first female Prime Minister Julia Gillard, to the victims of the forced adoption policies. Rosemary and her father both went, and they both wept. The speech was heart felt and genuine. Julia had no script to read from and she spoke with something that felt real. Rosemary has a copy of the speech, framed in her lounge room.

Tony Abbott, then the leader of the opposition party, also stood up to speak.

As Rosemary recounts it, “ He said its great you could find each other again, but the real mothers did a good job. It’s the real mothers, talking about the adoptive mothers, who we must thank, something along those lines.

Eight hundred people started booing Tony Abbott off the stage, because he had got it so wrong. People started shouting ‘we are the real mothers. Boooo!’ So that day was phenomenal, people leaning against walls just crying, crying, crying.”

The media coverage that day was minimal. I can’t help but think of this final, political slight to the mothers and children who have been already so wronged by the system, as a last ditch attempt to keep them silent.

With the introduction of Gough Whitlam’s 1973 unwed mother’s pension and the contraceptive pill, women began to gain the autonomy society was so afraid of them having. As the women’s feminist movement gained momentum, the forced adoption industry began to flounder.

In the evening, Rosemary and Pat found a rolled cigarette their son Ollie left behind on his last visit. Pat pours out two glasses of whiskey, his neat and Rosemary’s with soda, and they sit on the porch to smoke it together, giggling. The horn bird is almost starting to sound nice.

To you, the mothers who were betrayed by a system

That gave you no choice and subjected you to manipulation,

Mistreatment and malpractice, we apologise.

Cole, C 2004, The White Stolen Generation And Its Meaning For Women’s Citizenship In Australia, The University of Western Sydney School of Applied Social and Human Sciences, Sydney.