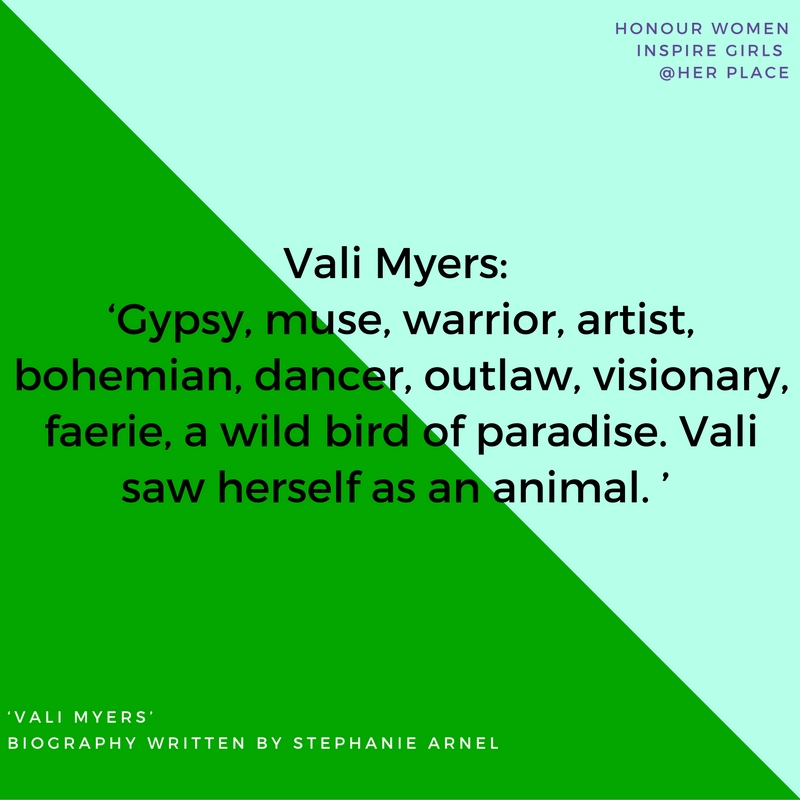 Somewhere beyond the sun

Framed in ink, poetry and life

Sparks push back the night

Igniting the fire of creation

The queen of foxes waits

Calling the wild ones home

Mariners marks upon her face

What do stars and donkeys say

Fond memories cast in a ring

Raise the moon one more time

Play the devil for a fool

I’ll meet you at twilight’s pool

When Vali Myers was in hospital, 72 years young, one of the hospital staff asked how she felt about dying. She had just been diagnosed with terminal cancer.

‘I don’t give a FUCK!’ she said. ‘I’ve nursed dying animals and I know what I’m in for but I’ve lived the life I wanted to live and I’ve done everything I wanted to do.’

Since having discovered Vali Myers, I’ve found that she has been called many things. Gypsy, muse, warrior, artist, bohemian, dancer, outlaw, visionary, faerie, a wild bird of paradise. Vali saw herself as an animal. One of her diary entries reads:

Let it all be animal, my life and death, hard and clean like that, anything but human… A lot I care, me with my red heart in the dark earth and my tattooed feet following the animal ways.

I find this animal perception she had of herself fascinating. She didn’t see herself as human, bound by the restrictions, expectations or conventions of society. She was a woman who followed her animal instincts, her fox nose. She followed that animal intuition wherever it took her, across the globe, without fear; right up to the day she passed away.

Reading reflections written by people who had met or known Vali Myers make me envious. I wish I could have been there during her lifetime. I wish I could have seen her draw or dance in the streets of Paris, Positano, New York or Melbourne. I wish I did an interview with her and heard her wild tales of travels and experiences first hand. I’d like to know what her gypsy jewellery sounded like as she moved. I’d even like to have smelt her as she walked by, a scent New York-based bohemian filmmaker Diane Rochlin described as ‘a mixture of essential oil – perhaps amber and a generalised animal smell – strong but not unpleasant.’

I find myself overwhelmed with awe as I pore through memoirs, diary entries, poems and art that have been created by and for her both online and in print. Where did that fearless animal spirit come from?

Her father was a merchant and her mother a violinist. They moved to Belmont, a seaside town, when Vali was five. Throughout the numerous diaries she kept throughout her life, Vali reminisces on her childhood:

I used to spend my time playing in the bush. I was afraid of nothing. Our house was built on little stilts over a lagoon.

From an early age, Vali was rebellious and artistic, notorious for day dreaming or drawing in class and avoiding other children.

The Myers family moved to Melbourne in 1941, for her father’s work. Vali withdrew further into her love of dancing, painting and drawing.

I was a nut. I was always putting on lipstick, not going to school, drawing.

At 14, tired of school, Vali left home. She moved into a share house in St Kilda, working at a factory to support herself and pay for ballet classes. By the age of 17 Vali was a lead dancer at the Melbourne Modern Ballet Company. She became renown for her exuberant dance style, wild red hair and heavily kohl-lined eyes.

I enjoyed wearing makeup. My father used to say to my mother, ‘Vera, how can you let her go out like that?’ But mum used to tell him it was my war paint. Believe me, in Melbourne in the 1940s, I needed it.

Melbourne wasn’t where she wanted to be.

At 19, Vali boarded a ship bound for Paris, France.

According to a fellow ship passenger, she wore a revealing outfit aboard, a daring shipboard ensemble that even made it into a London newspaper. Everyone stared in astonishment as she entered the dining saloon. On a cruise ship today it might not be controversial to wear a crop top, high-waisted bathing shorts and bare feet at sea. But in 1949 it certainly made waves.

The ship docked into Marseilles, France, four weeks later. Vali quickly moved to Paris to pursue her dancing career. But past-war repercussions were still affecting the lives of Parisians. She was broke within a week and living on the streets, on the Left Bank of Paris, an area notorious for bohemian dwellers. She survived off bread and milk and carried a knife for protection.

It was also during this time Vali made innumerable friends in the bohemian art and film industry. She began making a name for herself, mostly because of her eccentric personality, sense of style, drawings and self-portraits.

When she wasn’t drawing she occupied herself by dancing in all night cafes and jazz clubs. Onlookers described her dancing as endlessly energetic and bewitching.

We didn’t hang out in cafes because it was hip – we didn’t have anywhere else to go… dancing kept me alive.

Writer Gabriel Pommerand, who spent time on the Left Bank and published a series of Vali’s self-portraits, described her dancing as ‘a sinuous shuffling, bent-kneed, her shoulders and hands moving at trembling speed to the drumbeats.’

However, despite what her sinuous dance style portrayed about her lively personality, things were not always joyous. It was also during this time in Paris that Vali became addicted to opium. According to Pommerand, life on the Left Bank of Paris was a ‘confused, vice-enthralled demimonde.’ Opium was a common vice. In a letter to her friend, photographer Ed van der Elsken, Vali wrote of the dark time when she used:

I was very fragile and frail, rarely leaving my room till late in the night… For three years, I didn’t see the sunlight.

At 21 years of age, Vali decided it was time to leave Paris. She had been using and moving in and out of prison for homelessness for years. Life on the Left Bank no longer looked promising. So she commenced her tour of Europe, where she met architecture student and gypsy Rudi Rappold.

Their marriage enabled her to venture into Paris under a new name.

But they never stopped travelling. During one of their wanderings in Italy they discovered a valley in Positano. Vali and Rudi leased a small house at the base of a cliff, which she turned into a wildlife sanctuary.

Italian traveller, poet and artist Gianni Menichetti soon joined them. When her marriage to Rudi disintegrated, Gianni became Vali’s lifelong best friend and lover. Like Vali, Gianni moved into the valley and added animal activist to his list of endeavours. He still lives in the sanctuary to this day, looking after the animals. He believes that her spirit is still strong in the valley:

When I first saw her for me she was… like from a fairyland, which she was, she was a pure spirit. There was like a fox spirit for me. And I can’t get away because I feel as if I have her blood in my veins. To this very day, her blood is in my veins. But especially this place, she was the queen of this place.

Eventually, Vali travelled to New York to share her work.

A good fox always knows to hunt far from the burrow.

In America Vali became renown for her hypnotic, bewitching artwork. Spectators admired the vibrant colours and connectedness to nature. Her portraits are strongly connected to the natural world and animalistic traits of the human form. A lot of her self-portraits feature her naked female body somehow connected to other animals. Often her wild red hair is literally connected to animals, blending into their fur, feathers or fins, including whales, birds, foxes, pigs and dogs. Animals seem to be very much a part of her physicality, blending into her physical form quite naturally.

People who knew her often described her as a fox. Her hair was fox-like, she wore fox furs and she believed she had a fox-like intuition. Her favourite animal in their Positano sanctuary was Foxy the fox.

Vali garnered a lot of attention for her fox-like, bohemian sense of style. She roamed the streets in New York with bare feet. She exhibited intricate tattoos on her face, reminiscent of other artists’ facial hair. She wore outlandish coats, animal furs and jewellery that made onlookers consider her to look witch-like.

Vali became acquainted with a variety of artists, filmmakers and even rock stars like Mick Jagger. Popular artists like Salvador Dali and Andy Warhol praised her eccentric works of art. Playwright Tennessee Williams felt so affected when he met her he created a character inspired by her in his play, Orpheus Descending. The play was deemed refreshingly light-hearted, a change from his usual dark and twisted work. The free-spirited character, Carol Cutrere, is described in the audition description as ‘past thirty and, lacking prettiness, she has an odd, fugitive beauty which stressed almost to the point of fantasy.’

Vali spent the rest of her life travelling between New York, Paris and Positano, sharing her lifestyle and art with everyone she encountered.

In 1993, Vali finally returned to Melbourne.

She opened a studio in the Nicholas Building on Swanston Street, described then as the bohemian centre of Melbourne. In a letter to her soul mate, Gianni, Vali described Melbourne as a place where she could ‘feel like a bird that has spread its wings – finally – it’s a miracle!’

(Menichetti in McIntosh and Jones 2012)

Vali was surprised by how much she felt like she belonged in Australia:

I’d only bought a ticket to Australia lasting for three weeks. If I didn’t like it, I was just going to scat. But when I got here I was shocked… Despite all of the years away I’ve realised that deep down I’m very Australian.

Her space in the Nicholas Building has often been described as more than just a studio. It was not only full of art, but of fragments from Vali’s life; diaries, trinkets, jewellery, books, stuffed animals and photographs were scattered everywhere. When spectators visited they were encouraged to participate in the space, to drink and dance to gypsy music. In her diary, Vali expressed admiration for the people she encountered in Melbourne:

The city of Melbourne is beautiful… The people are wonderful and mind their own business, yet are shy and friendly… thank the stars that I survived to come back.

Vali spent the rest of her life continuing her work in Melbourne, flying to and from Positano to see her lover and their animals.

Vali described their home in Positano as a burrow full of animals; owls, dogs and foxes howling. She wrote frequently about their animals, garden, fireplace and the weather, demonstrating a strong spiritual connection to the natural world.

Vali was diagnosed with stomach cancer in 2002.

She decided to remain in Melbourne until she passed away. On her hospital bed she seemed unafraid of her illness, irrevocably fearless.

I’ve had 72 absolutely flaming years. It doesn’t bother me at all, because, you know love, when you’ve lived like I have, you’ve done it all. I put all my effort into living; any dope can drop dead. I’m in the hospital now, and I guess I’ll kick the bucket here. Every beetle does it, every bird, everybody. You come into the world and then you go.

Vali passed a year later. Her spirit remains in her writing, artwork, in other people’s stories, and in the places she called home.