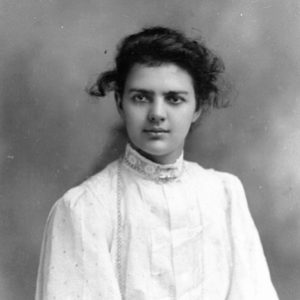 On behalf of the ANZAC Centenary Community Grant Program run by the Victorian Veterans Council, the Minister for Veterans John Eren awarded Her Place Women's Museum $15,000 to make a short documentary film on the life of Australian veteran doctor Mary De Garis.

The film will focus on her courageous and innovative work on the battlefields of Europe during World War One and beyond.

The aim is to illustrate the enormous bravery, determination, expertise and ingenuity of one Australian woman who risked her life to save the lives of others during World War One. It will also broaden the public knowledge of women's overall contribution to WW1.

The involvement of female doctors in World War One is a story that is not widely known or celebrated. The challenges that prevented women doctors participating in military were a reflection of the attitudes of the day. While not critical of past rules and regulations, the film tells a story that is not widely known and one which we believe would be of great interest at a time when gender equality is encouraged by our nation's military force.

This project will be accompanied by a public program of talks as well as education materials for primary and secondary students.

The film will be made accessible on our website, social media platforms, and will be part of Her Place Women's Museum Australia's online and touring exhibitions.