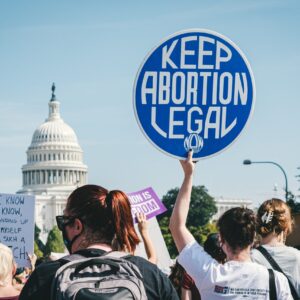 The dissolution of Roe v Wade in the United States of America has sent waves of outrage and grief across the globe, marking a seismic shift backwards in what should be an inherent human right. The overturning of the 1973 milestone legal case which made abortion a constitutional right in USA, has meant that the decisions of legality and access of abortion now defer to individual states governments. The Guttmacher Institute forecasted in April 2022 that 26 states in the USA were certain or likely to criminalise abortion if Roe v Wade was ever to be reversed. In the last week we have seen many of these states already changing their laws with immediate effect. This tragedy has reaffirmed the need for action against systemic control of a person’s right to choose whether they want to terminate their own pregnancy. The fight against systemic control over the bodies of those who may need access to abortion has had a long and ongoing history. It is a fight all women have had, and will continue to have, in the face of the failures of those in power. The importance of strong leadership, knowledge sharing and utilising the tools learnt from our individual and collective histories is an integral part of this fight.

In Australia, access to abortion is now legal in all states and territories, with South Australia being the last to decriminalise abortion only in 2021. For the past 25 years EMILY’s List Australia (ELA) has committed themselves to the fight for Abortion Law Reform by ensuring women’s voices are included in shaping the political and social landscape of Australia. One of the five foundational values of ELA is Choice.

Choice for ELA is the freedom of women to exercise their inherent right to have autonomy of their own bodies, when and how they choose, without fear of violence, discrimination, or coercion. ELA has played a vital role in achieving Abortion Law Reform by getting women voted into state and federal parliaments, lobbying governments and building strong and expansive networks of intersectional feminist organisations across Australia. Over 25 years ELA’s work, spearheaded by strong leaders such as the Hon. Cheryl Davenport, Kay Setches AM and Katrine Hildyard MP, has ensured all Australia women have access to the basic human right of accessing abortions.

While abortion is a legal medical procedure in every Australian state and territory, equitable access to abortion remains a global issue. In Australia, the barriers in accessing abortions are still disproportionately faced by First Nations women, those living in rural and remote communities and those who face financial challenges. These barriers play out in conjunction with the fallout of the COVID-19 pandemic, social indicators of continuing prejudices of some medical practitioners, and societal stigma towards the termination of a pregnancy.

Stripping the constitutional right of autonomy over one’s body by the USA Supreme Court has not just negatively impacted the lives of women across the USA, it has established a dangerous precedent from a global superpower, that revoking human rights is ok.

To read more on ELA’s impact on Abortion Law Reform in Australia: https://d3n8a8pro7vhmx.cloudfront.net/emilyslistaus/pages/298/attachments/original/1648170652/ELA_Research_Esther_Lee-Scott_Report_2021-web.pdf?1648170652

To read more on the impact of Roe v Wade: