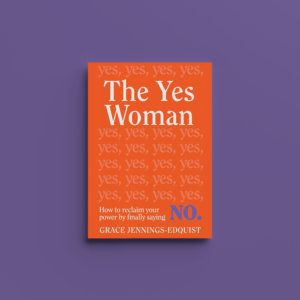 Australian journalist Grace Jennings-Edquist has written an important book: The Yes Woman: How to Reclaim Your Power by Finally Saying NO.

Combining her personal story with statistics, expert interviews and surveys of around 200 women, Grace unpacks the origins of female perfectionism and offers a practical guide for 'yes women' to seize control of their lives.

Grace kindly agreed to be interviewed by Her Place.

Could you tell us a bit more about why saying 'no' as a woman is, as you describe, a radical feat?

From the moment we’re born, girls and women are socialised to be agreeable and ‘nice’ – to say yes, both to direct requests and favours, and to unspoken societal expectations.

I talk in the book about the concept of “Niceness with a capital N”. I don’t mean ‘niceness’ here as in just being kind – which is a lovely trait in anyone of any gender. Rather, I’m talking about the idea that girls and women are socially obligated to be self-sacrificing, to please others, even if they have no interest in doing so and even if it pushing aside their own needs. We’re expected to be the ones who give up our time, energy and money to put other people’s needs first – and we’re punished if we don’t. For example, research shows we’re judged more harshly if we refuse to help a colleague at work, where male peers aren’t penalised for that at all.

To say ‘no’ is to step outside the mandatory agreeableness that is expected of us as women. Saying ‘no’ is also about making space to prioritise our own needs and wellbeing – which is a radical feat, in a society where women are expected to automatically concede to others’ demands and expectations.

How did becoming a mother act as the catalyst for your breaking point (which ultimately led you to discovering this phenomenon of the Yes Woman, setting you off on your journey of recovery)?

The book’s opening scene takes place in a perinatal mental health unit, where I ended up after suffering total burnout and severe anxiety soon after becoming a mum.

I had always been a people-pleaser and a perfectionist – so I’d been in the habit of saying ‘yes’ to everyone, and trying to be everything to everybody (and do it perfectly). But becoming a mother tipped me over the edge: I simply couldn’t do what I needed to legitimately focus on at that stage of life – the care of this new human- while also keeping everybody else happy: helping old colleagues with their job applications, agreeing to help a mate move house, keeping on top of industry news, and so on.

After my burnout, I realised that it wasn’t just me struggling with these expectations. I met scores of other women dealing with the same pressures, and feeling overwhelmed and overcommitted as a result (including some of the other mums in that perinatal mental health unit).

Being a journalist, I decided to dig further into the research around women, perfectionism and people-pleasing, and I interviewed a number of experts about the gendered and historical aspects of this phenomenon. I surveyed and interviewed more than 200 women about how they learned to say no and why it can be so damn hard, and also got stuck into feminist theory on this topic.

I ultimately realised there were tons of personal development books on the market about how to be assertive or set boundaries, but nothing I could see that really delved into the gendered implications or limitations around that. And so, my book The Yes Woman was born.

You highlight the fact that gender roles teach girls to be nice; we are socialised into agreeableness by a patriarchal system. How do we – individually and collectively – play a part in the societal changes needed to teach our daughters another way to be?

There are limitations on this our capacity to make huge changes alone, as individuals, admittedly: I’ll be the first person to say, I do sometimes get frustrated with feminist self-help books that say all we have to do is lean in, or speak up, or dress a certain way and then we (and our daughters) can get ahead. The truth is, there are systems at play that absolutely rely on women being quiet and saying yes to all sorts of things, from beauty expectations to unpaid domestic labour – and it’s doing women a disservice by suggesting we can self-help our way out of these expectations. I certainly don’t want to erase the existence of systems of capitalism and patriarchy (and other systems of oppression, which overlap in various ways to keep women down) by suggesting that learning to say ‘no’ at the individual level is the silver bullet when it comes to tackling the patriarchy.

So if we’re learning to say no, we need to simultaneously work towards changing the bigger picture for women. The final chapter of my book outlines how that can be done. There is a lot of power in collectively saying ‘no’ – and women have done this, in various ways throughout history, through feminist groups and unions and the like.

I also do believe that while each of us can’t individually singlehandedly smash the patriarchy, there are things we can do individually to make changes and model a different way of being for future generations. One thing we can do is, in small ways, combat the ‘tyranny of niceness‘ – as Helen Lewis has called it – by finding our voices in our own lives and pushing back on requests and demands that drain and diminish and silence us.

It’s problematic that chronic busyness drives our modern culture because, as you say, “busyness crowds out spontaneity.” Could you explain a bit more about how busyness is dominating our lives and putting added pressure on women?

We live in a culture that glorifies busyness. These days, people often talk about how busy they are as a ‘humble brag’; in a capitalist system that measures our value in terms of output, it’s become a way of suggesting we’re relevant and worthy. (I’m sure you’ve seen those profiles of CEOs who talk about waking up at 4:30am and cramming ‘personal development’ exercises into every waking minute, the idea being that our time must be optimised at all costs!)

As I describe in my book, many of us Yes Women have internalised this attitude that ‘busy is best’ – we feel guilty being idle, taking a doona day, or just walking through the park thinking freely and creatively. We feel we’re being more efficient if we live life at a breakneck pace: multitasking, frantically ticking items off a to-do list, hitting goals by tight deadlines.

But we pay a price for this way of being: Too often, we become chronically stressed, which has mental and physical consequences – from anxiety and burnout, to insomnia, stomach issues and headaches. Research shows that many of these mental health ramifications show up more often in women: We know, for example, that from the age she hits puberty to the time she turns 50, a woman is almost twice as likely to suffer from an anxiety disorder than a man.

There are other downsides to prioritising busyness, too. By focusing on busyness and productivity at all costs, we also crowd out spontaneity, and leave little space for contemplative, creative thinking.

The ‘productivity-as-importance’ mindset also sidelines people who can’t, and don’t, take part in the ‘working-hard economy’ – those with certain chronic health conditions or disabilities. And it devalues people with unpaid caring responsibilities, including parents and adults looking after ageing parents. there are clear gendered ramifications here, as women take on disproportionate amounts of unpaid childrearing work as well unpaid as care for adult relatives.

Modern Western society presents the idea of ‘intensive mothering’ as the norm, which, you say, could have a motto: “If you’re not stressed out, you’re doing it wrong.” What are some typical features of intensive mothering and how can women recognise this tendency in themselves?

Learning to say no is huge for mums – and that’s especially the case because we live in an age of super-involved, hyper-vigilant, child-centred parenting, known as ‘intensive mothering’. This cultural child-rearing trend basically involves constantly attempting to decipher the child’s wishes and needs, then trying to meet them at almost any cost. This parenting style is underpinned by the beliefs that the mother is the essential parent; that the time she spends with her kids is critical for positive cognitive, behavioural and academic outcomes; that good child-rearing requires placing the child’s needs before all else; and that parenting has to be an exhausting, challenging job.

As I write in the book, the motto of intensive parenting seems to be: ‘If you’re not stressed out, you’re doing it wrong’.

Many Yes Women – who suffer from perfectionism — also fear the shame that might follow if we fall short of these expectations. How has the pandemic exacerbated this?

Trying to perfectly execute intensive motherhood is a losing battle, because the demands of parenting today are more full-on than ever. That’s particularly the case in the context of a pandemic, as so many of us have found: We’ve struggled to home-school our kids or manage toddlers who have been pulled out of day care, while also completing our paid work.

Study after study has shown that stresses and mental ill-health consequences of this juggling act affect women – and particularly mothers- more than men and dads. Research out of Monash University has found that women are more likely than men to have clinically significant symptoms of depression and anxiety during lockdown – with researchers saying that caring responsibilities “contributed significantly to the risk of symptoms of depression and anxiety”.

With schools and day cares shut for long stretches, many of us have come smack-bang up against the impossibility of executing a ‘perfect’ style of intensive parenting – because the demands on us from all sides are just too great. And while this has been deeply stressful for most of us, some of us have found opportunities and new ways of operating: For example, some of us with partners have had to become better about saying no to the gendered division of domestic chores and the ‘mental load’ at home.

Many of us have also learned the necessity of actually saying no more often to our kids – especially if they’re home from day care or school while we’re trying to get paid work done.

Many of us have essentially lowered our expectations of ourselves when it comes to intensive parenting – and in many ways, I think that’s a good thing. My book outlines three ways saying no can actually benefit your kids: from teaching them resilience and empathy, to modelling self-care and boundaries for them.

Thank you to Grace for your time and wisdom.